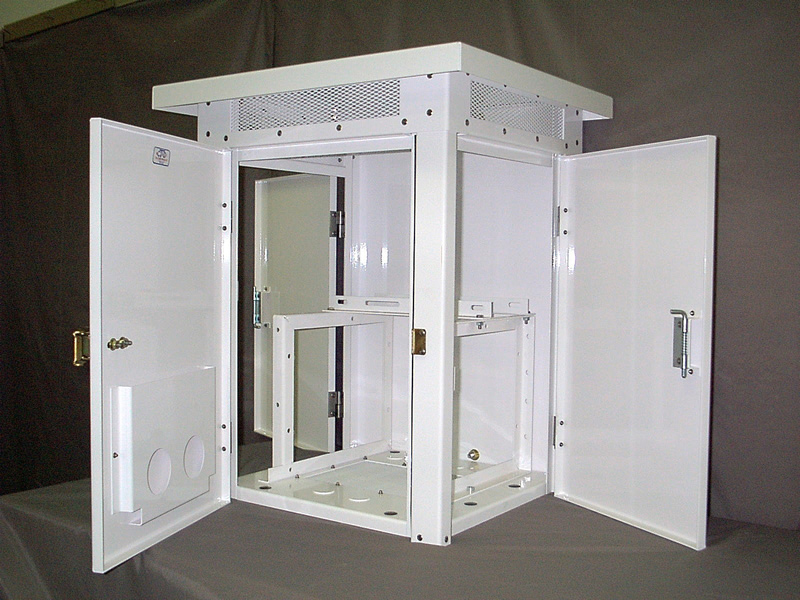 The thermal conductivity of various metallic materials can vary greatly and this conductivity is affected by the type of the material and the coating (if any) applied to the material. If a transformer rectifier (TR) is to be installed in an area with a higher operating ambient (such as 35°C (95°F) or higher) and the TR enclosure is to be a CEMA, NEMA, CSA Type 4/4X/12 rated enclosure (non-vented type), the thermal conductivity of the finish applied must be considered.

In regards to the thermal conductivity factor for metal, the three most common metallic materials we use for our enclosures are carbon steel, aluminum and stainless steel. 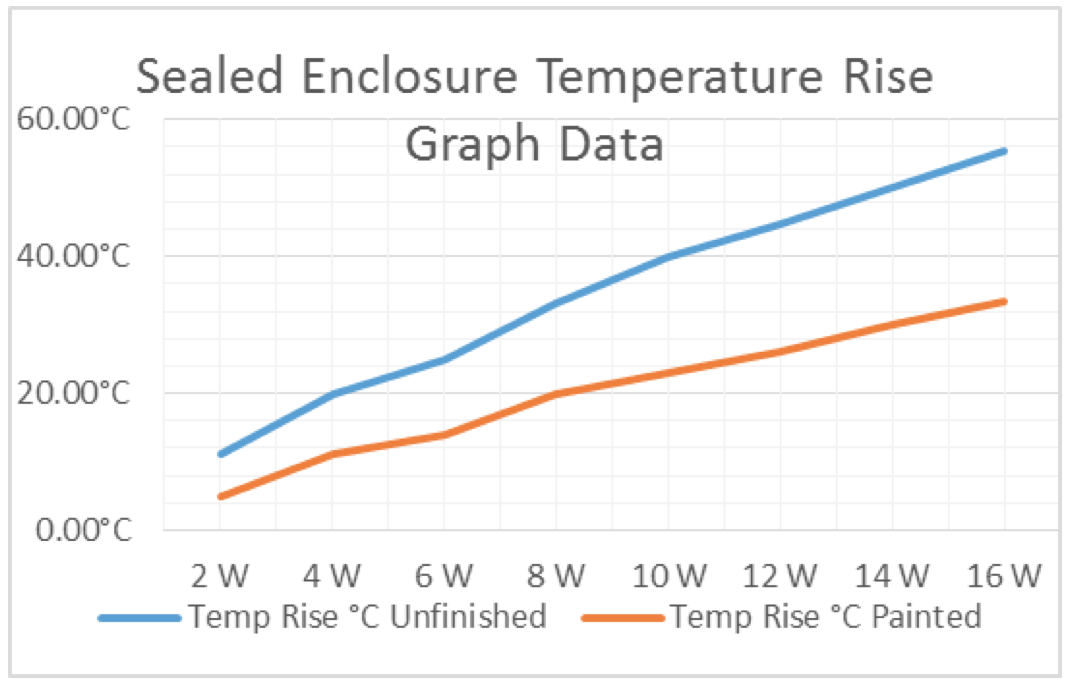 To utilize the graph, calculate the external surface area of the enclosure (3 sides are utilized for an enclosure that is wall mounted or if the rectifier utilizes a back-pan type of construction [such as the Benchmark series], and 4 sides are utilized for an enclosure that is pole mounted or utilizes floor stands). Calculate the total amount of losses within the enclosure including the main transformer, bridge, shunt(s), fuse(s), rheostat(s)/resistor(s) used for adjusting additional outputs, auxiliary transformers (used for powering optional equipment such as GPS interrupters) and anything else that generates heat. Take the calculated number of Watts and divide by the calculated surface area. Looking at the horizontal axis of the graph locate the calculated W/ft². From that point, go upwards until the intersection of either the painted (orange) or the unfinished (blue) line. At the intersection, go left towards the temperature (vertical axis on the left side of the graph) that point will indicate the average temperature rise within the enclosure. This is the average temperature (in the middle of the enclosure) and will increase towards the top of the enclosure (typically it is 18% hotter at the top of the enclosure versus the middle of the enclosure).

Calculate the total surface area of the enclosure 27.50 ft². 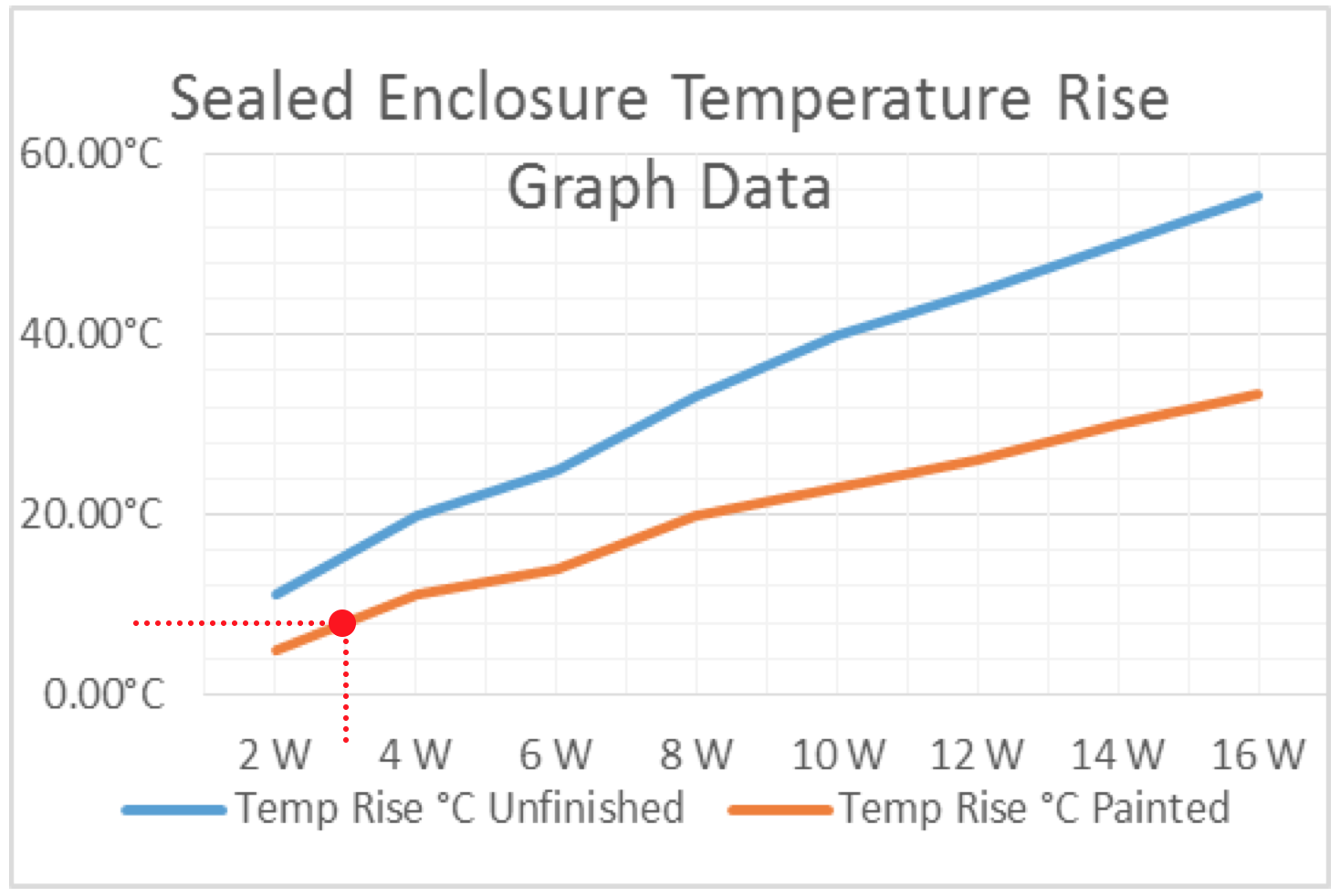 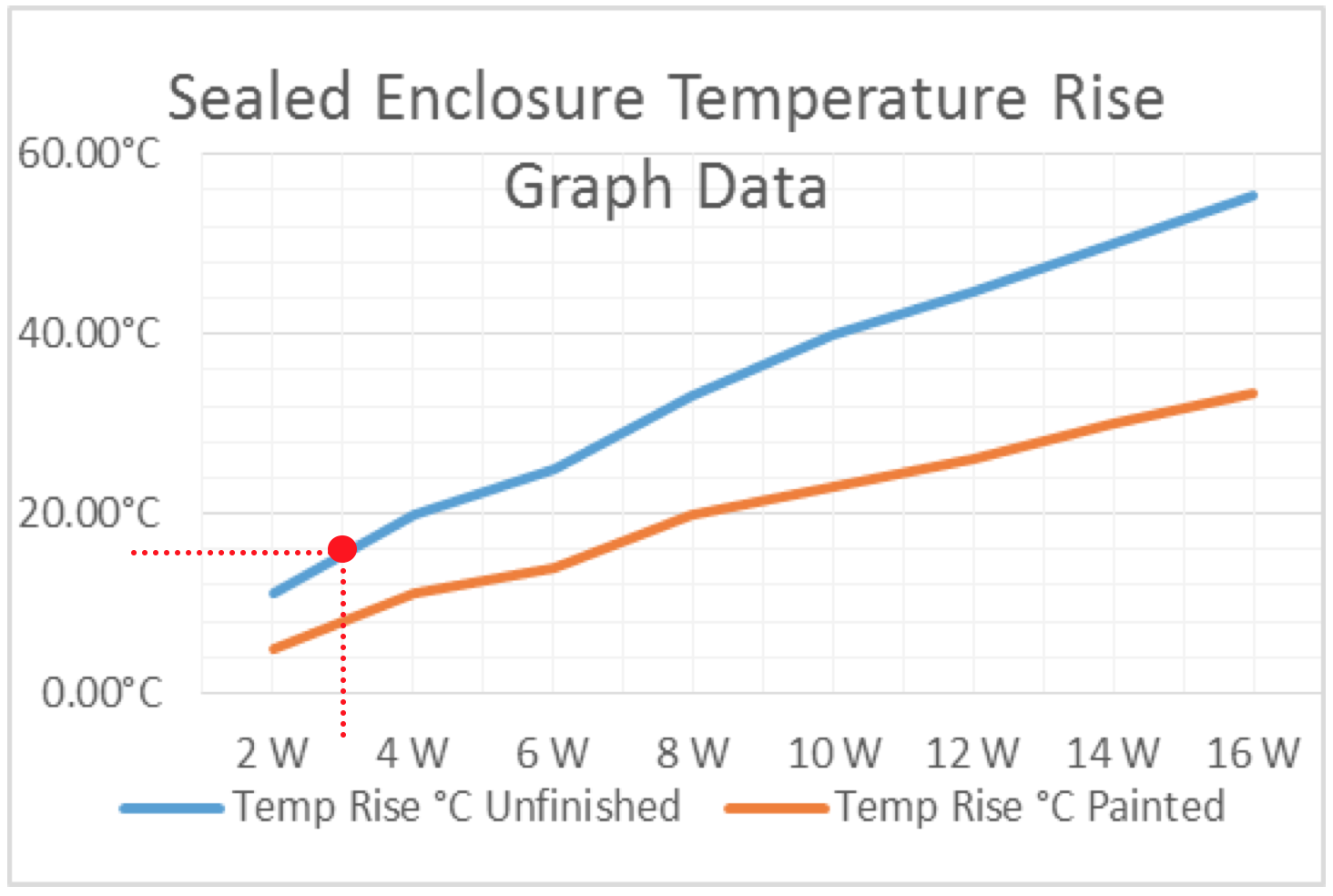 For a transformer rectifier unit that will be installed in an area with a higher operating ambient (35°C (95°F) or higher), we suggest that the enclosure material & enclosure coating be considered. Based on the above thermal conductivity characteristics and weight, obviously the painted aluminum type enclosure is the best choice. However, the aluminum enclosures can be significantly more costly than a standard steel enclosure. As stainless steel not only has poor thermal conductivity characteristics but is also the most costly of the metallic materials we offer, this material would be a poor choice unless it is required for it’s very good corrosion resistant characteristics (such as in chemical plants, etc.). In summary, the best overall enclosure material choice for a transformer rectifier unit operating in a higher operating ambient (35°C (95°F) or higher) and requiring a CEMA, NEMA, CSA Type 4/4X/12 rated enclosure (non-vented type), would be a standard steel enclosure with a light color coating.

(Note: Due to the issues & expense of coating this material, IRT does not offer coated stainless steel enclosures.)

For most “typical” Cathodic Protection type applications, a standard vented type enclosure (CEMA, NEMA, CSA Type 3R) can be, and is by far, the most used enclosure type. However, in certain applications such as dusty or corrosive atmospheres, wharves, offshore, chemical plants, mines, etc., the standard vented type enclosure may not be suitable. As such, we’re offering you the below information links on the various types of enclosures ratings available for your reference.